Joely Fisher belts out her life journey in “Growing Up Fisher”

Posted on December 13, 2017 by Bonnie Priever Curtain Up! 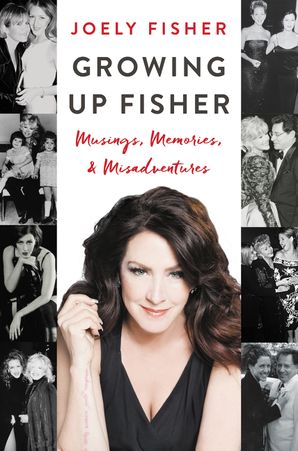 While it was a balmy, sultry night in the hills of Hollywood, with much of Los Angeles ablaze, Joely Fisher, too, was ‘on fire,’ in her amazing one woman show, ‘Growing Up Fisher;” her self proclaimed “in town audition,” at the Catalina Bar and Grill. Growing up right here in the LA/BH community, a product of a dysfunctional yet well meaning family, I feel a kindred spirit, of sorts, to the beautiful Joely Fisher. Her can do attitude of making lemonade out of sour lemons is a wellspring of positivity and opportunity, as indicated by her opening number.
She recalled a story of when Connie Stevens was in labor, Joely’s father was performing at the Frontier Hotel in Las Vegas. Onstage, he spoke on the phone to his wife and newborn baby, and a revealing joke was told by Frontier’s then busboy, Steve Wynn, now casino mogul, that Joely’s first singing words to her father were the lyrics “papa, can you hear me?”
– [ ] Joely opened her one woman show by stating, “my story is much to be told; I say do, try, laugh, believe in miracles. That’s how I put my act together.” In her newly released memoir, Growing Up Fisher, she felt she had so much to live up to, and in tribute to Eddie, she states “oh my papa, he made each one of us, his daughters, feel like his favorite.” In the background plays a slideshow of nostalgic family photos of Joely and family past and present. She shares with the audience how as a child she met legends, the likes of George Burns, Milton Berle, and Bob Hope, all serving as grandfatherly mentors. She wholeheartedly expressed, how “In this political time and precarious world, we must hold our loved ones tight,” and she abides by this philosophy.  In a segment of the show, called ‘love & stuff,’ she described what you do as Eddie Fisher’s and Connie Steven’s daughter and sang renditions from Grease (as Rizzo) and Cabaret (Sally Bowles). She received wonderful support and advice from her beloved sister, Carrie, “with the least amount of judgment and the most experience.” Looking into the “fishbowl,” as Joely called the offspring of Eddie Fisher , was like taking a peek into the “inner sanctum.” One original song that Joely shared had profound lyrics “for the girl that I used to be; the fate that sailed a thousand ships…nothing feels the way it was before and I don’t know how to proceed…I’ve got to know where I can be.” Continuing her moving tribute to Carrie, she sang “I never dreamed of sorrow – I wanted days of plenty. I refuse to feel tragic. There has got to be meaning. I want my life to go on, carry on. She will always be with you.
– [ ] http://www.catalinajazzclub.com